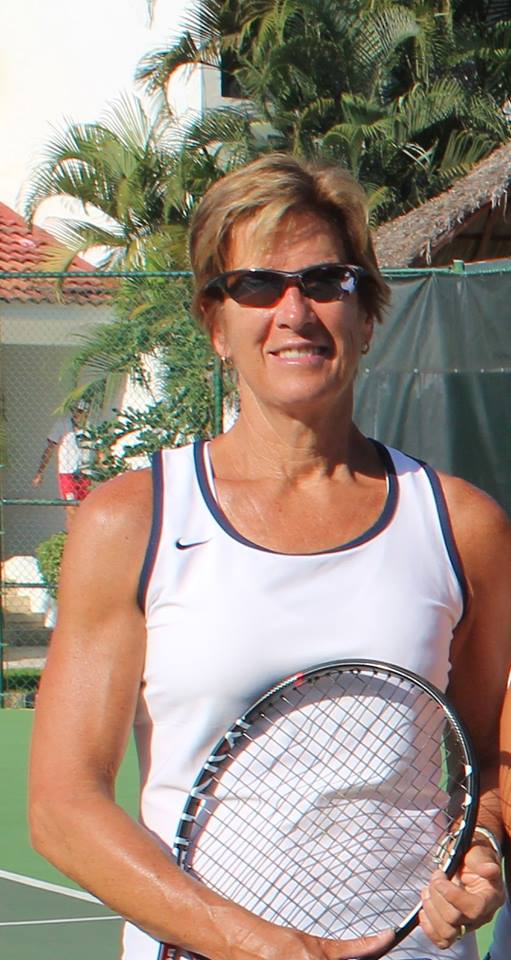 Now the seasonal Director of Tennis at Shenorock Shore Club in Rye, NY, and professional at The Saw Mill Club in Mt Kisco, NY, Lisa was previously the director of tennis at:

Also experienced in the restaurant business, she owned and operated Lobos Grill, Club Sandwich and the Alley Cafe in New Canaan, Ct.

Lisa is a former WTA player with a world ranking of #270 in singles.  She played basketball and tennis for the University of North Carolina at Chapel Hill, graduating in 1979 with a BA in Political Science.  She graduated from Horace Greeley High School in Chappaqua, New York.  Lisa also competed on the Eastern United States Volleyball travel team and went to Olympic basketball trials while at Horace Greeley.

She has held sectional rankings in women's singles and doubles in the Eastern, Florida and Northern California Sections and has been a USTA Nor Cal 35s, 40s and 45s sectional team player.

Lisa went into teaching because she loves the game.  Starting at age 6 as the youngest in a tennis playing family, "my parents could not get me off the court".  Her first real job was doing the Har-Tru court maintenance and teaching junior programs at a country club in New York at age 16.  She became a full time teaching pro in 1979, played professionally from 1982-1986 and resumed teaching again until 1989. In the restaurant business from 1989-1994 Lisa couldn't stay off the courts and returned full time to teaching, directing and managing in 1994. She is a USPTA certified Elite Professional and a MTMCA L3 certified professional.  She also served on the USPTA Eastern Board for the 2014-2016 term.

"I love motivating and figuring out how to get great results from every player".  That's how Servemaster came about.  While injured in 2009, Lisa finally had time to develop her tennis serve training tool.  After using a sock with balls in it as a flexible and weighted swing aid for 30 years, "Because the serve is so difficult to teach, I decided that a simple tool with all of the right components would be incredibly useful". So, after 18 months of development, research and work, Servemaster was patented and on the market.

Now that Servemaster is out there Lisa plans to launch her next recently patented serve teaching aid: TossMaster!

February 6, 2019: Be a Volleying Nightmare With Three Simple Improvements

September 14, 2018: Article by Brian Coleman: At the Net With Lisa Dodson

June 14, 2018: Develop Intensity for Focus and a Positive Attitude Throughout Play

March 30, 2018: Getting Attacked at the Net Instead of Being the Attacker?

November 16, 2017: Do You Really Understand What Your Pro Is Talking About?

April 5, 2016: Tips from the Tennis Pro: Determine the Essentials and Set a Plan for Your Best Tennis

December 3, 2015: TIPS FROM THE TENNIS PRO: WIN MATCHES BY MAKING YOUR OPPONENT UNCOMFORTABLE

October 2, 2015: TIPS FROM THE TENNIS PRO: PAIR THE GRIP AND TOSS FOR SERVE VARIETY

April 24, 2015: HOW MANY TENNIS PROS DOES IT TAKE TO GIVE THE IDEAL TENNIS LESSON?

December 11, 2014: THE TEMPO OF THE TAKE-BACK IS CRITICAL TO SERVE SUCCESS

February 7, 2014: A FOOLPROOF WAY TO THE CONTINENTAL GRIP OF THE SERVE

November 26, 2013: TAKE THE BEST OF YOUR SERVE FOR A KILLER OVERHEAD (PART III FINAL)

September 30, 2013: THE SERVE: TAKE THE BEST OF YOUR SERVE FOR A KILLER OVERHEAD (PART II)

June 27, 2013: THE SERVE: IMMEDIATE RESULTS WITH TIPS AND ZONE PRACTICE

December 4, 2012: WHAT DOES RACKET HEAD SPEED MEAN FOR THE SERVE?